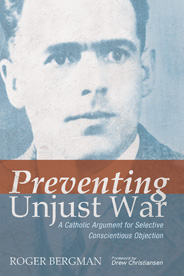 Catholic pacifists blame the just war tradition of their Church. That tradition, they say, can be invoked to justify any war, and so it must be jettisoned. This book argues that the problem is not the just war tradition but the unjust war tradition. Ambitious rulers start wars that cannot be justified, and yet warriors continue to fight them. The problem is the belief that warriors do not hold any responsibility for judging the justice of the wars they are ordered to fight. However unjust, a command renders any war “just” for the obedient warrior. This book argues that selective conscientious objection, the right and duty to refuse to fight unjust wars, is the solution. Strengthening the just war tradition depends on a heightened role for the personal conscience of the warrior. That in turn depends on a heightened role for the Church in forming and supporting consciences and judging the justice of particular wars. As Saint Augustine wrote, “The wise man will wage just wars. . . . For, unless the wars were just, he would not have to wage them, and in such circumstances he would not be involved in war at all.”

It’s Time presents a series of short stories highlighting an important but neglected aspect of life. Serious illness and aging are dependable harbingers of life’s end. For each of us, there comes a point when we must admit, it’s time. We hear the doctor say this to a dying patient and family members, to parents too long in the family home, to sobered younger people when a spouse or child becomes seriously ill. This kairos, this moment of profound significance, comes to us all. Good stories appeal to everyone. Students, particularly medical students or those in pastoral ministry or other health care disciplines, will find this book a unique, rich resource. Senior learners will find the essays helpful to work through their own history of decision-making, grief, loss. The essays provoke discussion and often closure for painful issues. When It’s Time, each of us must put away the dreams of youth and consider with seriousness death, illness, and grief. This book can help us do just that. It does it well.