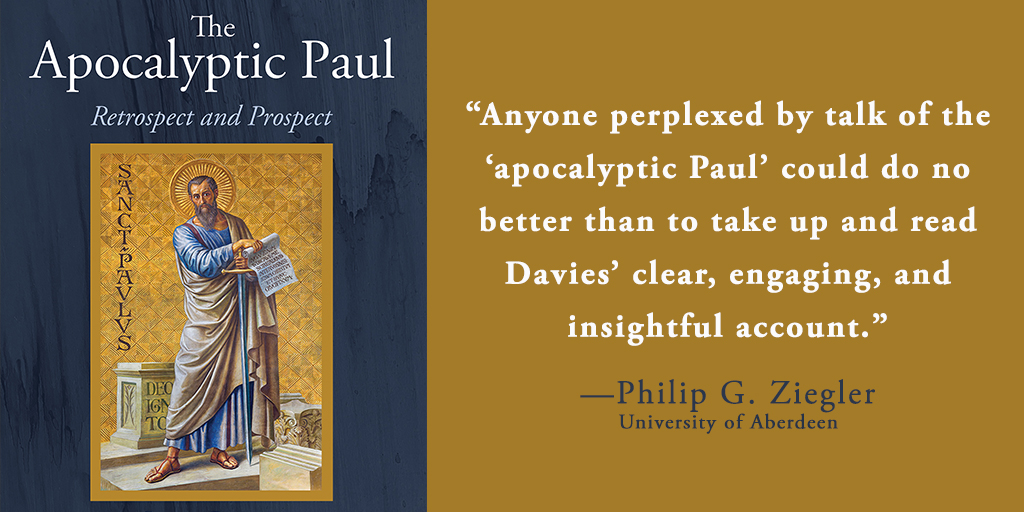 In this new Cascade volume, New Testament scholar Jamie Davies offers a retrospective introduction to the conversation around the “apocalyptic Paul,” charting its development from the turn of the twentieth century to the present, surveying the contemporary situation. Davies also explores a more prospective account of the challenges and questions that are likely to energize discussion in the future, before offering some contributions to the apocalyptic reading of Paul through an interdisciplinary conversation between the fields of New Testament scholarship, Second Temple Jewish apocalypticism, and Christian systematic theology.

I never really wanted to write on Paul. This is my second book on Paul. When I began my doctoral dissertation, which I planned to write on the book of Revelation, my supervisor, Grant Macaskill, suggested I begin by reading up on what the word “apocalyptic” means. No doubt he knew exactly what he was doing, but I headed to the library blissfully unaware of the quagmire into which he had sent me. The literature on Revelation and on the apocalyptic genre was vast but fascinating, and my reading in that area yielded all sorts of insights. I read the primary texts, worked through the influential volumes by John Collins and Christopher Rowland, and got up to speed on the work of the Enoch Seminar and other recent contributions. When I turned to the discussions of apocalyptic theology in Pauline scholarship, however, I found myself perplexed by a conversation which sounded simultaneously familiar and strange. I reported this confusion back to my (clearly not surprised) supervisor, and I was rapidly drawn into the task of exploring the similarities and differences of this “other” parallel conversation. My dissertation topic soon shifted to reflect this new interest. I recall that feeling of overwhelming confusion lasting about a year. The discussion about Paul’s apocalyptic theology sometimes intersected with what I knew from studying Revelation and other texts in the apocalyptic genre, to be sure, but there also seemed to be another conversation going on, sometimes in the same room but more often in an adjoining one. It was a lively conversation among friends, but I was (as we all are) entering it in full swing and I wasn’t sure I fully understood the talking points. Lacking an initiation to this conversation, I ended up spending a large amount of time and energy trying to orient myself by distilling the key issues from a large corpus of essays, monographs, and commentaries on Paul.

Of course, that was time well spent, and the brief retrospective offered in the first part of this book should not be a substitute for the careful read-ing of that scholarship, a lot of which will be signaled in the footnotes of the following chapters. But there comes a point when that literature becomes so vast that it can be bewildering to the uninitiated, and significant themes and voices can too easily be missed. With all of this, it can be helpful to have a guide, and that’s one of the reasons I have written this book. Its intended audience is, in part, graduate students and nonspecialist New Testament scholars who are looking for a brief and accessible overview of this perspective on Paul. Perhaps it will prove useful for others, too, but it should be made clear at the outset that this is a book which is concerned with offering an orientation to the Apocalyptic Paul, its past, present, and possible futures of this fascinating interpretation of Paul’s letters. A second concern of this book, however, is a desire to foster and (hopefully) to model generous interdisciplinary dialogue within and beyond the guild of Pauline scholarship, as the conversation continues about his apocalyptic theology, and to make contributions to that end. As such, I have in places signaled where I think such dialogue might bear fruit, posed some critical questions, and have offered some constructive proposals of my own.

It’s impossible to say anything about the apostle Paul without it being controversial to someone. The apocalyptic reading of Paul is no different, stimulating lively debate in the guild of Pauline scholars and, as we shall see, beyond. For my own part, while affirming many of the interpretative theological insights this approach to Paul has provided, I still have questions, some of which are indicated and explored in what follows.

Though I speak unambiguously throughout this volume of The Apocalyptic Paul, I am keenly aware that labeling a “school” or a “movement” is always fraught with problems. For one thing, it risks imposing a false homogeneity on what is actually a subtly diverse range of interpretative proposals. For another, it can easily be complicit with a worrying fragmentation of the discipline into segregated tribes, each with its own specialized vocabulary and stock bibliographies. The guild of Pauline scholars, already too often a “silo” within New Testament studies, risks becoming further fragmented into such “schools,” which threaten to shrink into ever smaller echo chambers. This is not to minimize the importance of specialist conversations taking place with agreed terminological shorthand and unspoken shared commitments—that is naturally important for any discipline if we are to avoid endless prolegomena. But an unintended side-effect of this can sometimes be that important areas of common ground between interpretations are minimized, while differences are exaggerated or skewed by those defending their tribe.

More broadly, I have had a growing sense that too often the debate is characterized by confusion over key concepts and terms, and some talking at cross-purposes. Leading figures in the discussion claim that they have been misunderstood by their critics, sometimes with good reason. Accusations of supersessionist or Marcionite errors are regularly thrown around, at times threatening to devolve into ad hominem attacks or trenchant stagnation. While some may enjoy the gladiatorial spectacle of theological prizefighting, to my mind this approach does poor service to the task of theology (not to mention its object of study) and can certainly make entrance into the conversation even more daunting for the uninitiated. In these pages I have tried, here and there, to clarify some of the muddy waters and to pour oil on others, to avoid partisan flag-waving, and perhaps even name some common ground. Whether I have been successful in any of this is, of course, for others to assess, but it is my sincere hope that those named in these chapters recognize themselves in my summaries and find any critiques well placed. Perhaps some of the areas where I have suggested common ground will turn out to be nothing of the sort, while others may bear fruit. But maybe even clarifying that could itself be worthwhile. Since this is a book at least partly aimed at introducing the discussion, I am conscious that some readers may be trying to figure out their own way in, and perhaps these “conversation starters” will prove helpful in that regard.

Jamie Davies is Tutor of New Testament at Trinity College, Bristol (UK). He is the author of Paul Among the Apocalypses? (2016).