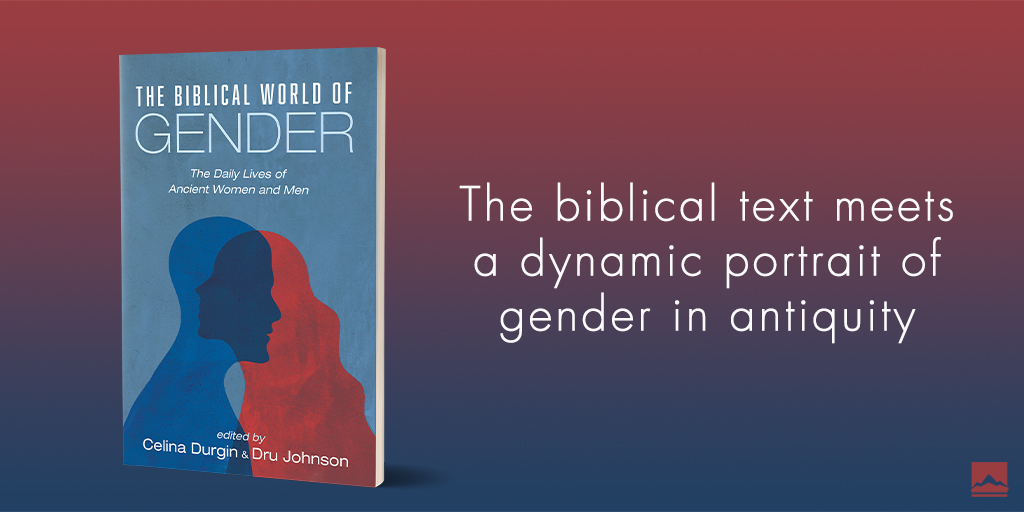 Recent Cascade volume, The Biblical World of Gender, asks: What were the lives of women and men like in ancient Israel? How did this affect their thinking about gender? Recent discussions of “biblical womanhood and manhood” tend to reflect our current concepts of masculinity and femininity, and less so the lived world of the biblical authors. Instead of working out gender through Genesis’s creation and Paul’s household codes, the contributors ask: What was life like on an ancient Israelite farmstead, in a Second Temple synagogue, or in a Roman household in Ephesus? Who ran things in the home, in the village, in the cities? Who had influence and social power, and how did they employ it? Taking insights from anthropology and archaeology, the authors of this collection paint a dynamic portrait of gender in antiquity that has been put into conversation with the biblical texts.

[The following excerpt is pulled from the book’s introduction, written by editors Celina Durgin and Dru Johnson.]

Gender discussions of late often concern what women should be or do with respect to men. Ironically, in these discussions, gender is sometimes treated as a “women’s issue” in a manner that would make Simone de Beauvoir turn over in her grave. In Scripture, men are not the default to which women are “the other.” Of course, gender is not a “women’s issue”; it is a human issue. Whatever the image of God is, it’s at least “male and female” (Gen 1:27).

The Biblical World of Gender specifically explores gender in the Bible and in the daily lives of ancient Hebrews. Why yet another book on gender? Gender is not portrayed in the biblical literature how we typically think of it. In fact, gender does not often appear to be a noteworthy issue at all, except in practical matters. Nonetheless, Genesis 1 invests the image of God itself with “male and female,” making sex central to what it means to be human. The Biblical World of Gender explores gender “backstage” in the daily lives and assumptions of the biblical authors and “on-stage” in their writings.

Recent discussions of “biblical womanhood and manhood” tend to reflect our current concepts of masculinity and femininity, and less so the lived world of the biblical authors. Whether opposing the perceived patriarchy or justifying a benevolent form of it, these latest proposals often attempt to work out the entire issue of gender and sex through a few key passages such as Genesis 1–3, Judges, and Paul’s household codes—or something like that. This book will approach gender and social power in the Bible very differently.

We suggest that our current paradigms of masculinity and femininity can run interference and prevent us from considering what the biblical authors implicitly assumed about men and women. And, our cultural ideals of sex and gender are changing rapidly, which means our theologies of gender have often been too reactive to these changes, to say the least.

Instead, we want to ask: What was life like on an Israelite farmstead, in a Second Temple synagogue, or in a Roman household in Ephesus? How did daily life differ according to gender? Who ran things in the home, in the village, in the cities? Who had influence and social power, and how did they employ it? It turns out that archeology and the Bible’s own portraits of women and men undermine a simplistic view of silenced and oppressed women under the thumb of an ancient patriarchal society.

The problem we keep seeing: contemporary “biblical” gender discussions seem to emerge without a sufficiently informed imagination about what everyday life might have been like for ancient women and men. Absent from most of these public conversations are the biblical authors’ own tacit assumptions about gender built from the ground up in the time and land of the texts.

Meanwhile, a spate of scholars have been working diligently to illuminate the biblical literature, grounding their understanding in the subsistence-agrarian world of the biblical authors. These scholars have attempted to factor in how men and women employed their social and political power within those contexts. They examine how Iron Age Israelites and Second Temple Jews and gentiles divided labor between the sexes and how they worked together to survive year in and out. Taking insights from anthropology and archaeology, they paint a dynamic portrait of gender in antiquity that has been put into conversation with the biblical texts.

Celina Durgin is the Director of Operations at the Center for Hebraic Thought, editor of The Biblical Mind, and has written and reported on politics, religion, and culture.

Dru Johnson is an associate professor of biblical studies at The King’s College in New York City and director of the Center for Hebraic Thought.