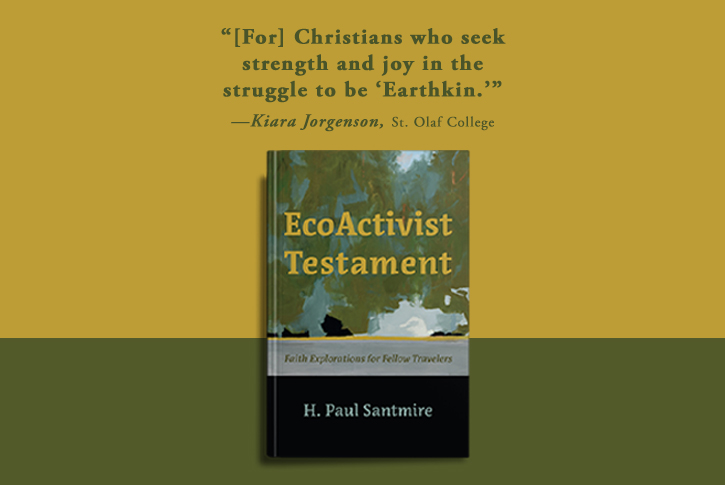 [The following is an article by Cascade author, H. Paul Santmire, on his recent book, EcoActivist Testament. The article has been previously published on Santmire’s Walking Thoughts blog.]

In recent months, I have been unashamedly talking about my new book, EcoActivist Testament: Explorations of Faith and Nature for Fellow Travelers (Cascade), with anyone who might be willing to listen.

I have particularly sought out younger friends and coworkers, whose concerns were much on my mind when I wrote the book. Ecoactivists from younger generations are the ones, mostly, who have stationed themselves at the frontlines of our common struggle against climate change and climate injustice. I have tried to listen intently to their voices every step along the way.

While I surely welcome the engagement of older generations with this book – we need you, more than ever, as activist church-member Bill McKibben has lately demonstrated, with his Third Act organizing initiative – it is no cliché to say that the future of our planet is now squarely in the hands of the young. This is especially the case, in my view, with younger activists who have identified themselves, in one way or another, with the Christian faith.

Hence I will push my new book, unashamedly as I say, into the hands of anyone who’s interested. I have never heard of any authors who would not want to talk about their own works. So I plead guilty, with a whole bunch of others. But I also plead hopeful.

I have been around the block a few times with the theology and the eco-social analysis that this little book presupposes. But this may be my most forceful personal statement of all. If I were sitting with you in some congenial drinking establishment, and if you were to ask me what theological and spiritual thoughts have most informed my – now – nine books on ecotheology and ecojustice since before I produced by first book, Brother Earth, in 1970, the following “answers” are the kind of thoughts that I would share with you. The questions that prompt my reflections here were posed early on, in fact, by my publisher, when my book proposal was first being considered. This is what the publisher asked; and this is what I said in return.

Why did you write this book? I discovered the obvious: that younger generations of American church members are often deeply involved in the struggle to address climate change and to seek justice for those who are most effected by our global ecojustice crisis, but that they aren’t always able to draw on the rich theological resources of their own faith to help them pursue their commitments. Meanwhile, the preaching that many of them hear on Sundays tends to be preoccupied with other issues, many of them critically important, to be sure. EcoActivist Testament seeks to address the need of those younger generations for theological support for their ecoactivism, directly and in terms of personal narrative.

What are you trying to tell your readers? First, that ours is the golden age of ecological theology. Theological resources for ecoactivism abound in our time, above all Pope Francis’ powerful encyclical, Laudato Si’. Second, that it’s critical for faith-driven ecoactivists to lay hold of global ecojustice issues in terms of their own faith. To that end, in EcoActivist Testament, I try to provide an example of one person’s own story in dealing with these issues, as an invitation for them to enrich their own personal stories, theologically and spiritually, on their own terms.

How did your own personal history prompt you write this book? At various points in EcoActivist Testament I write about my own life with nature and about the development of my own earth-spirituality. Throughout, I also narrate my own struggle to find ways to be faithful to the biblical God’s call for justice for the poor and all the other oppressed creatures of this earth. Think of the predicament of my own social location, however: a white, affluent, privileged cis gendered American man!  I begin with lots of strikes against me. Given that predicament, I struggle in this book to find a voice that reflects the witness of the Bible and that transcends my own social location. I hope that I have succeeded in some measure. But that’s for readers to decide.

However well motivated, can religious people really make a difference? They already have. Think of the civil rights movement in the last century, when religious leaders and many other religious people played a key role implementing vast social changes.  I believe that in our times we may be near a critical mass for an ecojustice-oriented religious leader or group of leaders to emerge to spark the nation to ecojustice repentance and ecojustice renewal. I hope that my little book may be able to inspire at least a few Christians to be part of that transforming moment when it occurs, even leaders in precipitating it.

How does this book address younger generations? In writing EcoActivist Testament, I have been very much aware of that question, as I said at the start. Many people in the current generations of ecojustice activists – and I include younger clergy in this group – take a no-nonsense, hands-on approach to the larger issues of our times. These folks tend to be impatient, for better or for worse, with thick, heavily footnoted books. They don’t have a lot of time for nuanced – tortured, some of them think – arguments. They want authors like me to get to the point, without delay. I wrote EcoActivist Testament to address such folks. I hope that I have succeeded, at least in some measure.

What one thing would you like your readers to take away from this book? You don’t have to save the world. God has done and will do that. But you ought to be ready for that next step of faithful discipleship that God is calling you to take, especially when it comes to responding, with other like-minded souls, to our global ecojustice crisis. God will graciously give you the vision and the wisdom and the inner power to take that next step that God is calling you to take. But are you going to be ready when God reaches out to you?

In lifting up this next-step approach to discipleship, I believe that I am, in some measure, learning from the example of St. Francis, who walked the walk of love for all creatures, at least as forcefully as he talked that talk.

Describe your chapters’ themes as briefly as possible: Reclaiming a Vocation – Celebrating St. Francis – Spiritual Practices in a Forest – Encountering Treehood – Hearing Nature’s Voices – Our Sublimely Natural God – Confronting the End of Nature – the Political Mission of the Church Today: Doing Nothing.