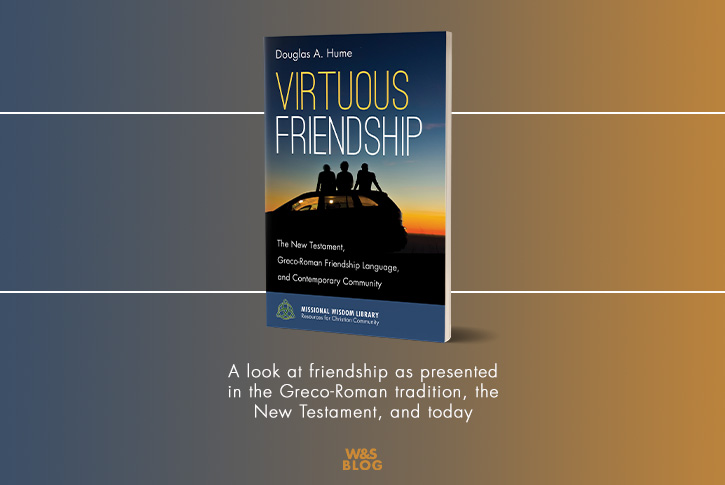 Douglas A. Hume’s Virtuous Friendship (Cascade, 2019) explores the question of friendship from a Christian perspective. This question of friendship, its definition, virtue, and quality, is not a new one to the church or the culture in which Christianity was birthed. Greco-Roman ethicists were fascinated by the virtue of friendship. Taking a cue from Jesus, the New Testament authors transformed Greco-Roman friendship notions to express visions of Christian community that were spiritually fulfilling, sustainably flourishing, and socially just. This book traces the New Testament transformation of friendship in specific passages in Matthew, Luke, John, Acts, Philippians, and James, and connects them to contemporary issues and cutting-edge experiments in Christian community.

[The following excerpt is pulled from the book’s introduction.]

What does friendship look like today? Who are our friends? Where do we find them? In spite of new technologies and increased mobility, are we lonelier than ever? Is friendship changing? Is friendship a virtue, merely beneficial to human flourishing, or an essential part of human life? These are not new questions. From the Epic of Gilgamesh to contemporary American TV series, narratives that reflect on the nature of friendship remain important to human culture. Anyone who watches TV can attest to the importance of friendship in the shows we like. From the popular Cheers in the 1980s to Friends or Seinfeld in the ’90s and the more recent Big Bang Theory, viewers enjoy watching fictional characters pursue and develop friendships. One episode after another the characters in these stories meet in bars, coffee-shops, lunchrooms, and living rooms to do little except place one another in awkward, comedy-laden situations. Much may have changed since the Epic of Gilgamesh, but the human preoccupation with friendship has not.

While the plots of TV comedies are generally trivial, what is striking about them is that they reveal our continued desire for authentic and lasting friendships. TV viewers tune in to be “where everyone knows your name,” as the theme song from Cheers goes. Such shows offer viewers not only the opportunity to reflect on the nature of friendship, they may also provide an escape. Reading or viewing the idyllic or flawed friendships of fictional characters may fill a kind of narrative void in our complicated, sometimes broken and hectic lives. Could it be that peoples’ real lives are becoming so empty, so void of meaningful friendships and functioning communities, that the friendships portrayed in these television series provide at least a little reprieve from loneliness?

In his now classic Bowling Alone, Robert Putnam argues that there has been a serious increase in social isolation in America starting in the latter half of the twentieth century. By compiling and analyzing numerous sociological studies, Putnam describes the decline of social capital, the “tangible substances that count for most in the daily lives of people”: community, common cause, and social engagement and fellowship. Among Putnam’s most stunning findings were that informal social connections such as active involvement in clubs, visiting in one another’s homes, and even having regular family meals were in measurable decline between 1970 and 2000. Church involvement among younger people also slumped by at least 10–12 percent in roughly the same period. These trends also impact individual lives and friendships. If friendship can be defined as discussing important matters with someone close to us, we may be in real trouble. McPherson et al. find that between 1985 and 2004 the sizes of average Americans’ conversation networks have been shrinking. The number of people who report that they have no one with whom to confide has also tripled during this period.

Such declines may also translate into the lives of religious communities. After a slight increase in the late ’90s and early 2000s, the declines in church attendance have not only continued, but accelerated, with losses of between 11 and 18 percent between 2000 and 2010 among mainline Protestant denominations. In addition, the sense of belonging one might derive from being part of a religious community has also decreased. The sample of Americans who had “no religion” in 1967 was at 2 percent. In the 1990s, this number had increased to 11 percent, with a full one in five reporting to the Pew Research Center that they had no religious affiliation in 2012. If people are looking for community and friendship, it is increasingly less likely that they are seeking it in church.

In assessing change, social scientists caution us from grasping easy answers. Putnam’s work, as significant a contribution as it was, focused chiefly on Americans’ participation in political, civic, and religious organizations, and other more traditional forms of work and social interactions. The way Americans are connecting is changing, but that doesn’t necessarily mean a decline. True, Americans may no longer gather to play bridge as frequently as in the past. However, with internet-driven social networking, Americans may have opportunities to connect and engage with people near and far over a myriad of interests. With the widespread adoption of the internet, Americans have seen measurable increases in the numbers and types of social connections online and beyond. In fact, a summary of the data suggests that Americans may be able to count as many friends in the 2000s as in the 1970s, although the social contexts in which these friendships were made and sustained may have shifted from places like the church to the workplace or online. Instead of seeing their social networks restricted to the Tuesday night neighborhood bridge club or the Wednesday night church supper, Americans might be using Facebook to find nearby running clubs or community bands. Perhaps they are networking through Instagram with photographers from all over the world, or connecting with an online weight loss website for support from dieters all across the country. Instead of becoming more socially isolated, in this global, technological age, many of us are more connected than ever.

Social scientists describe the new model in which people in the contemporary world relate to one another as “networked individualism.” In such a world, “it is the person who is the focus: not the family, not the work unit, not the neighborhood, and not the social group.” This “reach beyond the world of tight groups” is what Rainie and Wellman describe as the first of a triple revolution that includes also an internet revolution of massively increased communication and information-gathering capacity, and a mobility revolution that allows us to experience “continuous presence and pervasive awareness” of others in the network, making physical separation in time and space less important. We are now part of social networks that are more geographically dispersed, more closely tailored to an individual’s interests and pursuits, and provide people with new sources for solving problems and meeting personal and emotional needs.

Douglas A. Hume is Associate Professor and Chair of the Religion and Practical Theology Department at Pfeiffer University in Charlotte, North Carolina, where he teaches both undergraduate and graduate professional students. He is the author of The Early Christian Community: A Narrative Analysis of Acts 2:41–47 and 4:32–35 (2011) and is the past president of the Society of Biblical Literature Southeastern Region.