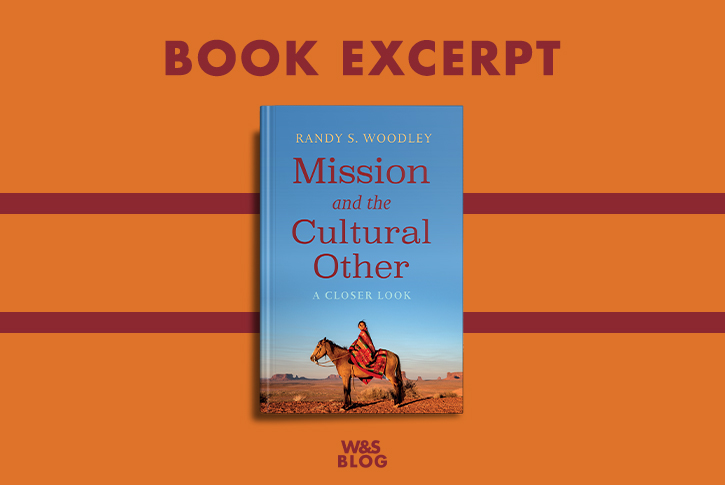 New Cascade volume, Mission and the Cultural Other, is a decolonial critique of a too often failed missionary enterprise. Rev. Dr. Randy Woodley, a former missionary and missiologist, writes both as an insider and an outsider. As an Indigenous person, a missionary among Native Americans, and a decolonial theologian with over thirty years of experience in various missionary movements, he has seen the best and worst that American mission has to offer. Before change can be made in a guarded system such as Christian mission, the critique must be pervasive and cut to the core of the problem. To truly understand the weakness of modern mission, we need to hear from those who have been its casualties, argues Woodley.

[The following excerpt is pulled from the introduction of Mission and the Cultural Other.]

I struggled personally with whether this book should be written. Granted, this statement is an awkward point from which to begin. Native American scholar William Baldridge warns, “When Indians theologize, they must place one foot into the Euro-American culture; and if they are not careful, they will soon have both feet outside their own culture.” The dilemma comes from attempting to offer a perspective that represents my own personal decolonial critique while utilizing the framework of colonial mechanisms and structure. In addition, the project relates to Christian mission, which has almost always been the bane of North American Indigenous communities. This book provides me with a great deal of cultural conflict.

The culpabilities of the Western missionary project are well established but the consequences are even more apparent. This book is both a critique of Western missiological hegemony and a redirection of mission as understood from at least one Indigenous perspective. To begin, I offer one simple definition of colonial missions:

“It is a process in which the ‘savages’ of colonialism are ushered, by earnest Protestant evangelists, into the revelation of their own misery, are promised salvation through self-discovery and civilization, and are drawn into a conversation with modern capitalism—only to find themselves enmeshed, willingly or not, in its order of signs and values, interests and passions, wants and needs.”

My doctoral research, which led to a PhD in intercultural studies, was particularly about Native American values. Personal experience dictates that among the values of traditional Indigenous people is a conviction that life should be lived communally and reflected upon, for the most part, in private. By taking the Western pedagogical path of writing a book, I have already turned aside from some of those traditional Native American values. Discovery, for Indigenous people, is made in the whole of living life, not through creating extrinsic categories foreign to Indigenous cultures from which to ponder and expound. However, this process is common in Western research, which places primary importance upon the written word. Nevertheless, narrative can also be a very powerful medium and is common among Indigenous people, so I ask you to think of this book as story.

Indigenous people tend to value oral cultural practices over the written word. There remains an Indigenous belief that words have inherent power and especially that they should not be used to deceive others. As is often the case among Indigenous peoples, when words are put into written form, many believe those words lack power because they are without context and taken from outside the vision and heart of the speaker. Ronald Niezen, in his book Spirit Wars, states,

“There is a tension between written forms of experience and the persistence of oral and nonverbal expression in contemporary Native spirituality. If the spoken word is fraught with unpredictable power, writing can be seen as an even greater source of spiritual compromise.”

Native American values teach that each moment is sacred and organic, and recording those sacred moments outside the sacred space from which they took place could be viewed as presumptuous. I will say more about orality later. Indigenous people tend to take life as it comes, giving each moment its due as it occurs. My deepest research concerned itself with Native American values that are ancient and still very deeply rooted among Native Americans and many other Indigenous peoples, especially those who are more traditional and less modern. Regretfully, I must slightly transgress my own cultural values in order to transcend toward examining some of modernity’s negative influences upon Native American and other Indigenous people, and perhaps, the whole mission enterprise. I hope my transgression may eventually be forgiven by those who take offense if my efforts can inform others and help to create a better missiology in the future of America’s Indigenes and others around the world.

Given the devastating history between Christian mission and Native Americans, my own context, and those of other peoples who have been the object of mission globally, I pose the question of how Christians can attempt to formulate culturally contextual models of mission without repeating the mistakes of the past. In the past, attempts to contextualize missions culturally among American Indians have been hotly contested, especially by Native American Christians who have absorbed Western values. I know the same is true in parts of every continent on the globe. Because of its controversial nature, and for other reasons, deeply cultural contextual mission among Native North Americans and others remains largely ignored by most Western mission agencies and denominations.

Like many people, Indigenous peoples believe that happiness and well-being are worthwhile goals. Based upon the data, the current state of well-being among Native American people is dire. If Christians are going to continue to do missions among Indigenous peoples, the need for better models is critical. The same is true in foreign mission. In order for better mission models to develop, it makes sense that such models should be based upon those traditional cultural values and not upon the values of the dominant Western society.

Taken as a whole, no standard mission practice is capable of producing an enduring sense of happiness or well-being. This is particularly the case among Native Americans. Two hundred years ago, Tenskwatawa, also known as “the Prophet,” and brother to famous Shawnee Indian chief Tecumseh, referenced a sense of happiness or well-being among Native Americans that was in rapid decline. Later, we will take a closer look at the Prophet’s words and their relevance for today.

In order for people to find a restored sense of well-being, they need to recover their traditional values and discard the declining and disoriented values of the dominant white society that have been established over the past several centuries. Additionally, there needs to be deep and direct engagement, not through Western culture, but between those cultures and the Scriptures. Through such engagement an overarching theme will surface as a means for producing holistic, culturally sensitive, contextual community-based mission models that are rooted in non-Western values and that produce a sense of well-being for Indigenous and other peoples in the world.

The phenomenon of Indigenous concepts of happiness or well-being are at the forefront of my proposed paradigm. Most often I interpret these concepts through the lens of “harmony” or “balance” in life. Over the years of lived experience and study I have found a set of Indigenous values associated with these concepts of well-being that is shared more broadly among Native Americans and even by other Indigenous people around the world. This way of living and being in harmony often parallels biblical values, and creates a theological foundation for mission. Furthermore, these values draw from a broad-based contextual model of mission among Native North Americans.

In my doctoral research, I set out to explore the possibility that the core values of most Native North Americans might be centered in Indigenous concepts of well-being. For this exploration to occur, I needed to identify the core Indigenous values of various tribes, found within their own well-being concepts, and then attempt to determine whether or not the core Indigenous values could be synthesized easily into one broad conceptuality. I needed to discover whether or not these concepts were more similar or dissimilar to one another before I could attempt to link them to a broad scriptural/theological theme.

I began the project with a three-pronged framework—from a biblical/theological construction of shalom, a contextually based, anthropologically informed missiology, and an Indigenous construction of decolonization and indigenization. A framework for studying values emerged based on literature from the fields of counseling, sociology, anthropology, education, missiology, history, and religion. The values themselves emerged from conversations with elders/spiritual leaders who participated in extensive inter-views. I also surveyed over one hundred Native Americans. All the survey responses and interview responses were analyzed using grounded theory as a way to discover and organize a system of values. I linked responses with literature regarding Native American value studies, discourse, and experiences as the value categories emerged. I was able to establish among Native Americans a widely spread construct I call the “Harmony Way.” I was then able to isolate and examine ten commonly held core values that exist within the framework of the Native American Harmony Way, upon which the framework of this book is built.

The research, along with my years of experience both as a missionary and as an anti-missionary, raised questions about current approaches to Native American mission and about the dangers of formulating mission models that are not based on Native American values and not within the framework of a Native American concept of “well-being” or what I will refer to as the “Native American Harmony Way.” I hope my research will contribute to the practice of disrupting systems of oppression, especially in the missionary movement, and encourage the formation of alliances to promote Native American models of service that are empowering and liberating for all.

Randy S. Woodley is a recognized activist/leader and teacher in the fields of Indigenous and intercultural studies, theology, ecology, and missiology. He is the author of several books, including Indigenous Theology and the Western Worldview: A Decolonial Approach to Christian Doctrine, Becoming Rooted: One Hundred Days of Reconnecting with Sacred Earth, and Decolonizing Evangelicalism: An 11:59PM Conversation (Cascade) co-authored with Bo Sanders.