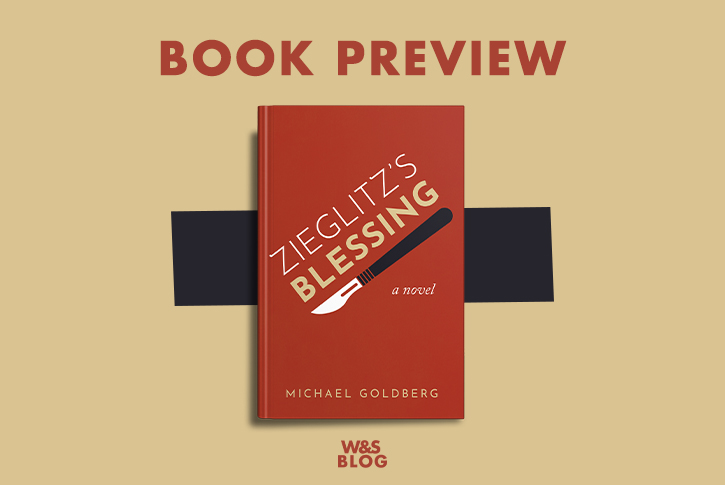 The forthcoming Cascade volume, Zieglitz’s Blessing—set to be published December 12—tells the story of a multigenerational search for identity and the meaning of a man’s life. From childhood, Rod Zieglitz questions the truthfulness of his Hebrew name, which means “God will show mercy.” Sometimes that name seems fitting. At other times, though, it strikes Zieglitz as a cruel joke. Only on his deathbed, grappling with the challenges he’s faced, does Zieglitz rightly understand the notion of God’s blessing for the first time. While Zieglitz’s Blessing is often comic and even irreverent, it’s an ultimately serious tale that runs the gamut from suffering to consolation, transgression to forgiveness, and faith lost to trust restored. Todd Brewster, New York Times #1 best-selling co-author of the The Century, has called the novel “tragic, comic, and, finally, redeeming.”

Read on for a short Q&A with author, Michael Goldberg, an excerpt from the novel, and advance praise for the book.

What made you want to write Zieglitz’s Blessing?

From Chaim Potok’s The Chosen to Howard Jacobson’s The Finkler Question, lots of novels have been written about what it means to be a Jew. I wanted to write a first-of-its-kind novel that explored not only “Who is a Jew?” but that also asked “Who is the Jews’ God?” and in so doing, tackled deeper questions about divine justice, love, and above all, blessing.

As the great rabbinic sage Mort Sahl once said, “It’s all true, but some of it is actual.” While the book does reflect certain episodes in my life, its title says what it essentially is: a novel. In other words, Zieglitz’s Blessing deals with events and people fictively, which is to say, imaginatively.

What part do names play in Zieglitz’s Blessing?

Many of the names—though not all—have a suggestive meaning. While the maternal side of the hero’s family goes by “Apter,” namely, the capable ones, the ones likely to succeed, the fraternal side, the Zieglitzes, whose name is at the other end of the alphabet, are also generally inept and unsuccessful. In a similar way, Y.H. is an allusion to YHWH. Y.H. eventually becomes a doctor—with an ego found in so many doctor-as-God jokes—and like the deity in this story, he is anything but approachable and warm. The book has several other allusive names as well.

At one part in Zieglitz’s Blessing, the title character is interviewing for rabbinical school. Coming from a philosophy background in college, he’s expecting deep theological questions from the admissions committee. The question which he’s asked, however, is “What’s your favorite Bible story?” Annoyed, he responds, “The one where the guy gets the nails in his hands.” The novel, which is ultimately a serious story, has several such humorous episodes nonetheless. Why include them?

Zieglitz’s Blessing is in one sense a book about religious people. It can be deadly—and I mean this quite literally – when religious people take themselves too seriously. Humor allows, indeed requires them to take a step back and examine what they’re doing from another angle. Humor is essential for the true religious life.

Up to now, you’ve been a nonfiction writer. How did you come to write a novel?

I’ve wanted to write a novel going back to seventh grade, but never thought I could do it. Ironically, my previous book, Raising Spirits: Stories of Suffering and Comfort at Death’s Door, put me in position to write my novel.  Although I originally conceived of Raising Spirits as a set of individual case studies reflecting verbatim conversations, I soon realized that there were other details I’d have to fill in myself to narrate these episodes in a compelling, true-to-life (and death) way. After the book was published, one of its readers, an Emmy-winning writer, got back to me and said he felt like he’d read a series of short stories with an overarching story arc. At that point, I thought for the first time that I could write a novel. Zieglitz’s Blessing is that novel.

An Excerpt from Zieglitz’s Blessing

He lifted his hospital sheets and peered down at its stump with disgust.

Not that things had started out that way.

“Our God and God of our ancestors, sustain this child. Let him be known among the Jewish People as ‘Yerachmiel ben Baruch.’”

Zieglitz had no actual memory of the event, nor, given his own recent experience, could he conceive of a male of any age wanting to summon up the image of a blade’s slicing off part of his penis. The first he’d heard of his initial maiming had come from his father eight years later, and then, only in passing.

“Look, Ricky,” he could still hear Daddy saying, “I had a bar mitzvah at the shul, and so did your Grandpa Irv. It’s a big step in your life, a sign of your becoming a man. But to get ready for it, you have to go to Hebrew school. It’s totally up to you. Do you want to get bar mitzvahed or not?”

Ricky was flabbergasted. Mommy hadn’t left brushing his teeth, or getting his shots up to him, and she’d given him no say in taking the swimming lessons in which she’d enrolled him to “get you away from your books for once.” Daddy had never given him much leeway, either, except for where to move next in checkers, something he’d invariably get wrong. Why, then, he wondered, had his father given him a say now in something so important?

“It’s like this, Ricky,” Daddy began, seeing his blank stare. “I want you to have more choices about what happens in your life than I’ve had in mine. If you decide against having a bar mitzvah, I know there’ll be people who’ll go along with your mother and accuse me of being cheap, of wanting to dodge the shul’s dues and the Hebrew school’s tuition. But I don’t care what any of them thinks — not even Pop!”

Ricky realized what a big deal it’d be for Daddy to stand up to his father, Grandpa Irv, who could read Hebrew faster than anybody else at their Seders. He never stopped for any English, not for so much as a “Blessed art Thou, O Lord,” which the rabbi Ricky would later become knew was the Haggadah’s rendering of its most recurrent Hebrew phrase, “Baruch atah Adonai.” The way Grandpa Irv whizzed through those words, they sounded like “Broke Otto Adenoid.”

“I guess it all boils down to this, pal,” Daddy said, placing his hands on Ricky’s shoulders. “Do you want a bar mitzvah? Are you willing to go to Hebrew school to have one?”

“All right, then,” Daddy replied, “you need to know what your Hebrew name is. It’s the first thing they’ll ask you in class.”

“That’s the name you got at your bris—”

Daddy took a deep breath; it wasn’t a topic he’d planned on addressing. “When you were eight days old,” he explained, “a rabbi came to the house to perform a ceremony called a ‘bris’ — what’s known in English as a ‘circumcision.’ It’s something we Jews have been doing for thousands of years . . . .” It took several minutes before Daddy got around to the part about the knife and Ricky’s schmeckle.

“But why there?” Ricky gasped in disbelief.

“Because that’s where God told Abraham to do it,” Daddy responded.

Daddy had just told Ricky the scariest story he’d ever heard: from the beginning, God, being Jewish, and pain had been inextricably bound up together.

“Zieglitz’s Blessing follows a man’s life through love, loss, anger, and redemption. At times funny, often heart-wrenching, and consistently thought-provoking, Goldberg’s novel will touch you in ways that will surely surprise you and stay with you long after reading it.”

“Michael Goldberg’s new genre-bending novel is itself a blessing: an unorthodox rabbi’s quixotic search to heal the wounds he has suffered and inflicted since his bris. Though an entertaining send-up of biblical contradictions and rabbinical hypocrisy, Goldberg’s book also explores his sinner’s inherent decency, honor, and love of family. Zieglitz’s Blessing carves a memory not soon forgotten.”

“Rare is the writer who can embed the deepest questions of human existence into a tale as absorbing as Zieglitz’s Blessing. Drawing on his considerable wit and on his lifelong experiences as a rabbi, a hospital chaplain, and as an ethicist, Goldberg has produced a novel that is tragic, comic, and, finally, redeeming.”

Michael Goldberg has been a Jewish Studies professor, management consultant, hospice chaplain, and congregational rabbi. Among his other books are: Jews and Christians: Getting our Stories Straight (1985); Why Should Jews Survive?: Looking Past the Holocaust Toward a Jewish Future (1995); and Raising Spirits: Stories of Suffering and Comfort at Death’s Door (2010).