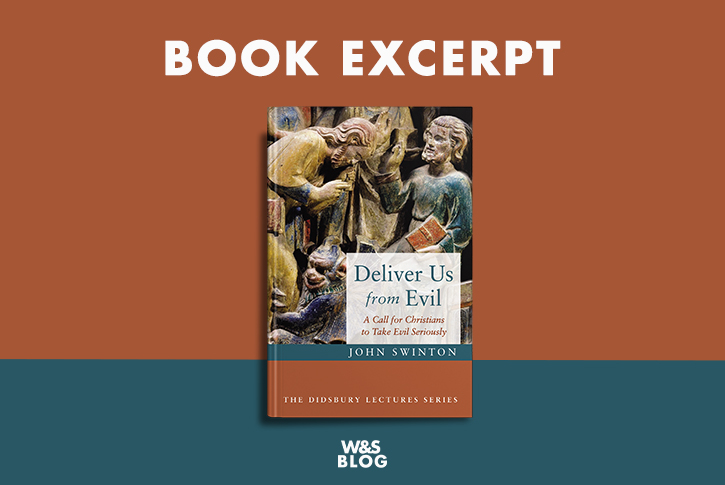 New Cascade volume, Deliver Us from Evil by John Swinton, asks: What do we mean when we call something or someone evil? The word “evil” tends to conjure up images of demons, devils, and horrifying crimes, things that you and I couldn’t possibly get involved with! But is that true? Is evil really something that only wicked people who are “quite unlike ourselves” get up to? Could it be that you and I are not only capable of doing evil things, but are already involved with such things? This book explores the hidden nature of evil and draws out the ways in which all of us, knowingly or otherwise, are caught up in webs of evil that bring about disastrous consequences, often to the weakest and most vulnerable amongst us.

[The following excerpt is pulled from the first chapter of Deliver Us from Evil.]

The Priority of Good and Evil as an Absence

This chapter explores some ways of understanding and ultimately responding faithfully to the multifaceted reality of evil. I begin with the doctrine of creation, or more specifically, the doctrine of creation out of nothing. The systematic theologian Ian McFarland points out that there are two dimensions of the creation story that relate directly to our understanding of evil: that God created the world out of nothing (creatio ex nihilo), and that God said that the world was good. The fact that the world was created out of nothing rather than something is important for these current purposes, because “Creation from nothing means that God is the sole condition of the world’s existence in every respect and at every moment.” There is no room here for Manichean forms of dualism, which see evil as a negative force or power that is somehow equal but opposite to God. There is only one creative force, and it is wholly good. Evil is certainly a reality, but it is a reality that emerges after God creates the world and proclaims creation to be good. It is therefore not a product of God’s good creative intentions. It is a distortion of God’s creation. Evil is that which God does not desire. McFarland names evil as those things within creation that are against God’s will.

Evil is not an aspect of the goodness of creation. Yet neither is evil an independent force. Instead, it is a distortion of creation’s goodness. Within creation, God ascribes each creature a place. We recognize God’s goodness in God’s desire for God’s creatures to flourish—to achieve ways of living within creation that are in line with their God-given nature. Put slightly differently, God desires God’s creatures to flourish according to their nature. Evil is “that which threatens or inhibits creatures’ flourishing as the beings God intends them to be.” If the essential meaning of human flourishing is to love God, self, and neighbor, as Jesus indicates (Mark 12:31), then evil is all that stands against such love. Evil tempts people to perceive the world in ways that distort the things of God and avoid and disrupt relationships between God and humans, and humans with each other. Evil lurks within such things as false perceptions of the world, racial and cultural stereotypes, misrepresentations, cultural blindness, and depersonalizing misidentifications, such a sexism, disablism, and xenophobia. The acknowledgement of the love of God and the presence of love and human flourishing are two indicators that evil is being resisted. When these things are absent, we know evil is either with us, or on its way.

Why Does Evil Exist?

The question “why does evil exist?” is, as I have argued elsewhere, an unanswerable mystery. Creatio ex nihilo emphasizes that evil is not God’s intention (God is good). That God seems to permit evil is both mysterious and deeply frustrating for us. That God permits evil seems obvious. Why God permits evil we do not know. Yet Matthew’s parable of the weeds gives us a fascinating insight:

Jesus told them another parable: “The kingdom of heaven is like a man who sowed good seed in his field. But while everyone was sleeping, his enemy came and sowed weeds among the wheat, and went away. When the wheat sprouted and formed heads, then the weeds also appeared. The owner’s servants came to him and said, ‘Sir, didn’t you sow good seed in your field? Where then did the weeds come from?’ ‘An enemy did this,’ he replied.”

“An enemy did this.” That’s chilling. It’s the point in a Stephen King novel when you suddenly realize that what you thought was going on is quite different from what is actually going on; the person you trusted and wanted to triumph turns out not to be quite as she first appeared. There is a malignant presence that you hadn’t accounted for . . . and it’s already here! Precisely who or what the enemy is is not yet clear. What is clear, however, is that there seems to be a force at work within creation that is out of kilter with God’s good plan, and which seeks to sow the seeds of human destruction. That force is active in the midst of the world. It is, however, a defeated force. The parable continues:

The servants asked him, “Do you want us to go and pull them up?” “No,” he answered, “because while you are pulling the weeds, you may uproot the wheat with them.  Let both grow together until the harvest. At that time I will tell the harvesters: First collect the weeds and tie them in bundles to be burned; then gather the wheat and bring it into my barn.” (Matt 13:28–30)

The idea that evil is interspersed with good seed is so empirically obvious that we might overlook it. But it is vitally important. Resisting evil will require that we develop the skills to discern evil in the apparent normality of our everyday lives. Without that discernment we risk harming the innocent. There is no justification for collateral damage in the Gospels. Fighting evil is subtle, careful, thoughtful, and powerful in its sensitivity. Wherever there is good there is probably evil. Working out which is which can be very difficult, as we shall see.

The complex and hidden nature of evil is not a reason for us to become resigned or complacent. The fact that this enemy will be with us until Jesus returns does not mean that we have to come to terms with the evil that it propagates. We don’t let child abuse go undetected and unpunished in the hope that all will end well. To do such a thing would itself be a mode of evil: “If anyone causes one of these little ones—those who believe in me—to stumble, it would be better for them to have a large millstone hung around their neck and to be drowned in the depths of the sea” (Matt 18:6). Ignoring evil (or implicitly or explicitly covering it up), is one way of becoming implicit in evil. God calls us to be aware of the presence of evil and to resist the enemy at all times (1 Pet 5:8).

In summary, Creatio ex nihilo reminds us that:

• God created the world and declared it good. It is good but somehow broken.

• God did not create evil, nor does God intend evil for God’s creatures.

• Evil is not an aspect of God’s being. “God is love” (1 John 4:8). God is good and loving: “Every good and perfect gift is from above, coming down from the Father of the heavenly lights, who does not change like shifting shadows” (Jas 1:17).

• Evil is not an illusion.

• God is not powerless against evil, but for reasons that are hid-den from us, God chooses not to destroy it completely yet.

• God is active in the world through human beings and through spiritual warfare to bring about God’s desired ends.

• In the final judgment, God will defeat evil.

• For now, Christians are called to look out for and resist evil.

John Swinton is professor in practical theology and pastoral care and chair in divinity and religious studies at the University of Aberdeen. He has published within the areas of theodicy, mental health, dementia, disability theology, spirituality and healthcare, qualitative research, and pastoral care.