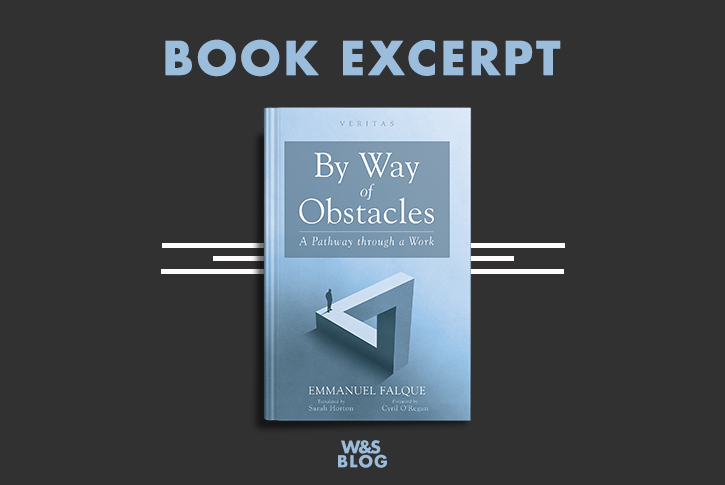 In By Way of Obstacles, Emmanuel Falque revisits the major themes of his work—finitude, the body, and the call for philosophers and theologians to “cross the Rubicon” by entering into dialogue—in light of objections that have been offered. In so doing, he offers a pathway through a work that will offer valuable insights both to newcomers to his thought and to those who are already familiar with it. Here readers will discover the profound relation between Falque’s emphasis on the human experience of the world and his desire for philosophy and Christian theology to enter into conversation. For only by speaking within the human horizon of finitude can Christianity be credible for human beings, and it is because Christian theology teaches that God entered into our finitude that it can also teach us something of what it is to be human.

[The following excerpt is pulled from the preface of By Way of Obstacles.]

With this essay a cycle or a new trilogy, this time a methodological one, is completed: Crossing the Rubicon (Fordham University Press, 2016), The Loving Struggle (Rowman and Littlefield International, 2018), and By Way of Obstacles (Éditions franciscaines, 2016). It being caught between the projects of a “philosophical Triduum” and a “theological recapitulation,” and indeed of other “philosophical essays,” it was necessary to finish with it, and indeed to set it forth, before going on. Stopovers sometimes mark summits, as is the case in high mountains. There are “base camps” or “dens” [repaires] that, to take up the “play on words” in French, are also “landmarks” [repères]. Drawing up maps, marking borders, evaluating one’s forces, counting one’s partners, measuring oneself against potential “adversaries,” yielding oneself to the “vagaries of time and weather,” and above all not overestimating oneself are so many preparatives that condition the expeditions that make it to the end.

Life is thus like a “pathway (strewn) with obstacles.” Everyone who, like the horseman pacing his horse, is always crossing an “obstacle course” knows this, or at the very least senses it. One tries, precariously, to forge ahead, here and there receiving “questions,” even “objections,” through which one remains within interrogation rather than freeing oneself from it through supposed solutions. It is by confronting others that one evaluates oneself. There one can measure oneself either in light of borders that are supposedly “fixed” between disciplines (Crossing the Rubicon), or in relation to “giants” whom we confront (The Loving Struggle), or by way of replies to interrogations that were addressed to us (By Way of Obstacles). The more one rises, the more one knows oneself to be drawn toward the earth. Climbing, one feels more and more the weight of one’s body. Here, therefore, one will strive to ascend, but always with a rope. In other adventures, one will certainly climb “bare-handed,” but only after having protected one’s “back,” or, rather, having examined with others the “ways” by which to cross.

Initially a sequel to a colloquium—Une analytique du passage [An Analytic of the Crossing] (Paris, July 2014)—but readable as, and also having since become, completely independent from it, this By Way of Obstacles, serving as an explanation, thus strives to do justice to a “philosophy in situation,” sure that one never advances alone and that the “loving struggle” among thinkers determines all real decisions, which never occur without, at the same time, a certain transformation. It is by confronting alterity that one discovers one’s own identity. Descartes, that “French horseman who set off at such a good pace” (Péguy), knew this—and he did not hesitate to join “Objections and Replies” to his Meditations on First Philosophy (1641), justifying his approach, which I here make my own in all respects, to Gassendi:

Before the publication of the first edition of these Meditations, I wanted them to be examined not only by the Doctors of the Sorbonne, but also by all other learned men who would take the trouble to scrutinize them. My aim was to have their objections and my replies published as a continuation of the Meditations, following the order in which they had been produced, and I hoped that this would serve to make the truth more evident. [.  .  .] I should make it clear here that I have recently re-read these objections together with the new counter-arguments in the lengthy volume which contains them, with the purpose of extracting all the points I judged to require an answer.

In short, and as will be clear, the essay presented here is inscribed within the long French tradition, called “Cartesian,” of Replies to Objections. There one is always discussing, or rather disputing, cutting to the heart of a “philosophy making itself ” and abandoning far behind the lures of a reflection that would not be so contextualized. The numerous “objectors” or participants, who came from different countries (France, Italy, the United States . . .), displayed a rare generosity, certainly in thought but also in their manner of deciding for themselves. It was therefore right to “return the favor,” not to retort but to show my gratitude toward those who gave me the honor, and the extraordinary privilege, of reading, arguing, and even also contradicting. A “colloquium” does not only refer to the academic exercise by which “eminences” meet each other or ought to dialogue but also, and perhaps first, to what Ignatius of Loyola names “the colloquium” at the end of a spiritual exercise—the “speaking-with” (coloquere) as “a friend speaks to a friend” (Spiritual Exercises, no. 54). I have been, and I therefore am, “among friends” in this By Way of Obstacles as in Une analytique du passage. Let us be careful, however. Being “among friends” in a “conference” (con-fere [to carry “with,” to gather]) is not limiting oneself to a “circle of friends.” On the contrary, nothing is worse than “getting on excessively (well),” than “gathering” together [se “ras-sembler”] just to “resemble” each other [se “ressembler”]. It is a matter of “speaking with” [colloquer], and not first of “arguing.” The “true friends” are those who differ [dissemblent] rather than assembling [s’assemblent], thereby being able to mutually enrich each other with what they lack or with what each one had not thought by himself or herself. Difference of views creates difference, which itself usually produces meaning.

Emmanuel Falque is Professor and Honorary Dean of the Faculty of Philosophy of the Catholic University of Paris. He is the founder of the International Network in Philosophy of Religion (INPR).