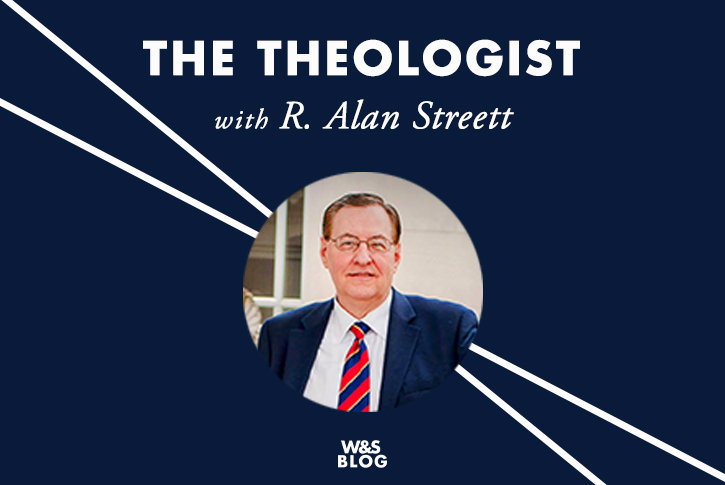 The Theologist is your guide to all things writing and publishing in the fields of theology and biblical studies, from finding inspiration for your work to reading the best literature on writing, from overcoming writing obstacles to finding writing mentors, and more. In this installation of The Theologist, we at Wipf and Stock interviewed R. Alan Streett, Senior Distinguished Professor Emeritus of Biblical Theology at Criswell College in Dallas, Texas. Streett is also the author of three Cascade volumes, including his latest, Songs of Resistance: Challenging Caesar and Empire (2022).

How many books have you written? Which is your favorite?

I have written five books, four of them in the last decade. I don’t have a favorite; however, I enjoyed writing Heaven on Earth, a popular treatment of the kingdom of God. At times, I found myself in the “zone” and the words flowed onto the paper. I almost felt “inspired.” Among my academic books, I am most proud of Subversive Meals: An Analysis of the Lord’s Supper under Roman Domination during the First Century (Pickwick, 2013). It laid the foundation for Caesar and the Sacrament (Cascade, 2018) and Songs of Resistance (Cascade, 2022).

What would you say is your most interesting writing quirk?

I have several quirks! But a few stand out. First, once I sit down to write nothing distracts me. I am absorbed in the task, lose sight of time and rarely get up, even to get a drink. A tornado could strike and I would be oblivious.

Second, I am an editing freak. I constantly read and reread what I have written and edit it until I am satisfied. After I complete a chapter, I read again and edit it before starting on the next.

Third, following the lead of Ernest Hemingway I work hard to eliminate extraneous words. I seek to write in clear crisp sentences.

When did you first realize you wanted to be a writer?

I have spent my entire adult life as a writer. As a pastor, I preached from a full manuscript. Later, as a college professor I wrote out all my lectures. For ten years, as editor of Criswell Theological Review, I solicited, read, and edited hundreds of journal articles. This taught me to spot and avoid the common pitfalls most writers make.

Only after I was named Senior Research Professor (2011), did I become passionate about writing.

Two “eureka” moments led me to this practice. The first was a TV interview with William F. Buckley, the late political commentator and author. When asked how he was able to write a three-hundred-page book annually over a span of two decades, he replied, “I write one page a day.”

The second came when reading Daily Rituals by Mason Curley on how great writers arranged their schedules. Curley discovered most followed daily routines that enabled them to be productive. To my surprise, many wrote nonstop from early morning to noon every day. Inspired by their example, I chose to follow suit.

How do you adapt your writing style to the intended audience of a given book?

Although most of my books, chapters, and articles are aimed at scholars, clergy, and seminarians, I work hard to write in a style that is accessible to a wider audience.

Who is the biggest influence on you and your work?

First, William S. Campbell, my PhD supervisor at the University of Wales, patiently taught me to be a scholar. Second, from Warren Carter I learned the need to understand the Roman Empire in order to grasp the NT. Knowing Jewish backgrounds is not enough. Finally, Richard Horsley’s books opened my eyes to the anti-imperial nature of the first-century Christ movement.

Has writing and publishing books changed the way you see yourself?

Yes. For the first thirty years of my professional life I viewed myself as a professor and mentor. After publishing three monographs that scholars acknowledged as making a small contribution to NT studies, my opinion began to change. When I was elected into the Studorium Novi Testamenti Societas, I realized I had reached a certain level of respectability among my peers.

I write for two reasons. First, I believe I have something worth writing about. My approach to NT studies is somewhat unique and I want to share my findings with  others. Second, I write for posterity. My books will outlive me. I hope a hundred years from now someone will stumble across one of my books and gain insight. “Though he is dead, yet he still speaks.”

What do you try most to avoid as a writer?

(1) Split infinitives! Although I am not always successful.

(2) The temptation to add “that” to a sentence when it is not needed.

(3) Theologizing. As a scholar, I do not write from a creedal position. Instead, I attempt to explain how first-century Christ followers and communities interpreted events. I take a descriptive rather than prescriptive approach to the Scriptures, leaving practical application to theologians and pastors.

Do you have any suggestions for young academics on how to become better writers? If so, what are they?

(1) Be curious and write about subjects that capture your imagination.

(2) Develop a thesis statement. Each chapter should should support it.

(4) Use primary sources. If another scholar references a source, read the original source for yourself before quoting it. They may have gotten it wrong.

(5) Know when to stop writing. Follow the law of diminishing returns. At some point the extra expenditure of time may not be worth it.

What book(s) do you think every person of faith should read?

The phrase “every person of faith” is quite broad, but I will offer a few recommendations.

(1) The Gospel of Luke to discover how Jesus related to and viewed people on the margins.

(2) Heaven on Earth: Experiencing the kingdom of God in the Here and Now, which takes a narrative approach to this important theme of the Bible.

(3) For a more academic-minded audience, I would recommend A Place at the Table (OUP) by John D’Elia, the tragic biography of George Eldon Ladd, an evangelical scholar who attempted to gain recognition in the wider world of scholarship, but failed. I also recommend The Black Jesus (Baylor) by Reggie L. Williams, the account of how Dietrich Bonhoeffer’s ministry changed as a result of his involvement with Harlem’s Abyssinian Baptist Church, while a postgraduate fellow at Union Theological Seminary.

What book (or books) are you currently reading?

Frederick Douglass: A Prophet of Freedom (Simon & Schuster), the mammoth work by David W. Blight and winner of the Pulitzer Prize in 2019.

The Confidence Men (Random House) by Margalit Fox. The account of two British prisoners in WWI and how they used their knowledge of magic and deception to pull off one of the most ingenious escapes of all time.

R. Alan Streett is Senior Distinguished Professor Emeritus of Biblical Theology at Criswell College in Dallas, Texas. He holds PhDs in New Testament and pastoral theology. His books include Songs of Resistance: Challenging Caesar and Empire (Cascade, 2022), Caesar and the Sacrament: Baptism: A Rite of Resistance (Cascade, 2018), and Subversive Meals: An Analysis of the Lord’s Supper under Roman Domination during the First Century (Pickwick, 2013).