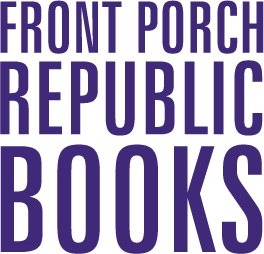 Launched in 2014, Front Porch Republic Books publishes works about place, localism, community, decentralism, and conservation. Titles include significant works on politics, economics, and culture, as well as new editions of previously published works that deserve a new audience. Other titles provide practical advice on how to enact and embody a localist ethic. FPR Books’ managing editor is Jason Peters, and its editorial advisory board includes such prominent public figures as Andrew Bacevich, Rod Dreher, Richard Gamble, and Walter McDougall.

Among FPR Books’ inaugural titles are Poetry Night at the Ballpark, and Other Scenes from an Alternative America, by Bill Kauffman; America Moved: Booth Tarkington’s Memoirs of Time and Place, 1869–1928, edited by Jeremy Beer; and The Demise of Virtue in Virtual America: The Moral Origins of the Great Recession, by David Bosworth.

A proletarianized citizenry ruled by a class of insolent plutocrats is incompatible with the republican form of government established by the US Constitution. Without an effective majority of citizens...

Ground Zero for the Staging of America

When Surveyor-General Thomas Hutchins drove a stake into the ground to mark a "point of beginning" for the 1785 establishment of Seven Ranges of townships on the west bank of the Ohio River, he had...

Family-Centered Economies That Have Stood the Test of Time

With over thirty thousand occupations currently in existence, workers today face a bewildering array of careers from which to choose, and upon which to center their lives. But there is more at stake...

A Tip of the Hat to Nonconformity

Some of the most interesting and genuinely commendable people in the world are systematically overlooked by our celebrity-obsessed media. This book is a reminder of just what a mistake that is--here...

More than a collection of vignettes and stories from garden, grill, and kitchen, The Culinary Plagiarist is a sustained adventure in gustatory delight, an intensely private but candid account of desire...

Localism in the Mass Age

In the United States the conventional left/right distinction has become increasingly irrelevant, if not harmful. The reigning political, cultural, and economic visions of both the Democrats and the...

Wendell Berry thinks of himself as a storyteller. It's somewhat ironic then that he is better known as an essayist, a poet, and an advocate for small farmers. The essays in this collection consider...

The Demise of Virtue in Virtual America

The Moral Origins of the Great Recession

Although the financial disaster of 2008 proved devastatingly quick, the evolution of the bad faith that drove the collapse is a more gradual story, and one that David Bosworth powerfully narrates in...

Bill Kauffman has carved out an idiosyncratic identity quite unlike any other American writer. Praised by the likes of Gore Vidal, Benjamin Schwarz, and George McGovern, he has, with a distinctive and...

America Moved: Booth Tarkington's Memoirs of Time and Place, 1869-1928 brings together for the first time all of the autobiographical writings of Booth Tarkington, one of the most successful and best-loved...
‹1›